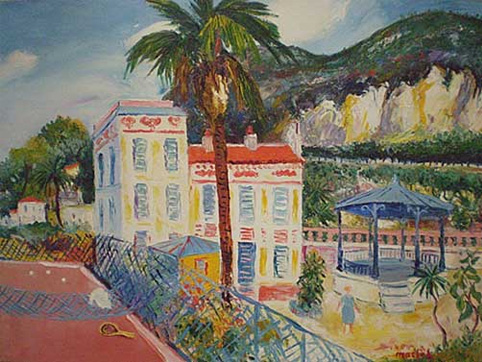 Maclet was born in Lyons-en Sonterre in Picardy, France in 1881. The son of a gardener, Maclet showed an aptitude for painting at an early age. Self taught, he developed a post impressionist style of naive art characterized by fauve-like colors and a commanding perspective that made his art unique. Maclet captured the feel of Montmartre during the “Belle Epoque” era prior to and after the first world war. His paintings of the iconic landmarks of Montmartre, such as the Lapin Agile, Moulin de la Galette and Maison de Mimi predate and influenced his contemporary, Maurice Utrillo.

His time spent in the south of France from 1923 to 1928 and later Corsica and Bretagne influenced his palate, his paintings became brighter, the colors stronger and using a palette knife his canvas took on a textured finish. Maclet returned to Paris in 1935 and suffered emotional trauma for a number of years, but eventually returned to painting the Parisian street scenes he loved. Maclet died in Paris in 1962.