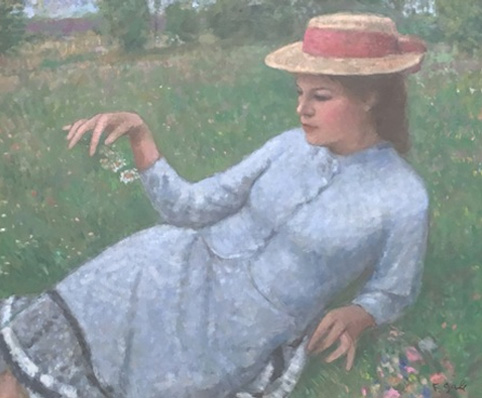 Born Ferenc Erdelyi Gall in Kosovar (Transylvania ) in 1912 to Hungarian parents, Gall died in Paris in 1987. In 1929 and 1930 Gall studied in Rome at the Academie Royale des Beaux-Arts. At the request of the Hungarian government, he briefly returned to his native country to study and teach at the Hungarian College of Art.

In 1936 Gall travelled to Paris to study at the l’Ecole Nationale des Beaux-Arts and became a student of Devambez. It was during this period of time that Gall came under the influence of the impressionists and post-impressionists. He adopted the post-impressionist style of painting and portrayed Parisian street scenes and still life. His paintings of women were among his favourite themes and often used his children as models.

In 1945 Gall become a citizen of France. At the Paris Salon of 1947, he was awarded the gold medal. Thereafter Gall enjoyed international recognition and success. From 1953 on, he exhibited in Canada and the United States on a regular basis.

In 1963 Gall won the Prix Francis Smith. He was appointed Laureate de L’Institut de France in 1965, and was awarded the prestigious Gustave Courtois Medaille d’Ore de Merite National Francais the same year. In 1970 he was awarded the Prix de Bonnat; the Prix de Becker in 1971 and the Prix Paul Chabas in 1972. In 1974 he was awarded the Medaille de Vermeil de la Ville de Paris. In 1976 he was elected to the most coveted of achievements for an artist, the chevalier dans l’Odre des Arts et des Lettres.