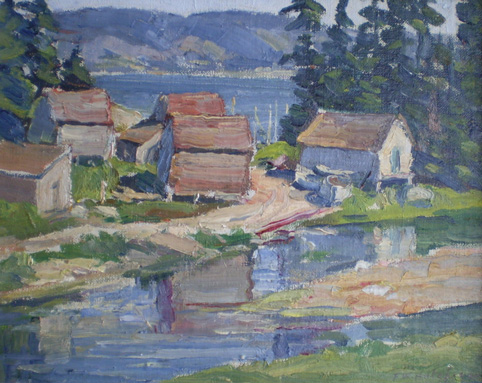 Frederick W. Hutchison , born in Montreal in 1871 studied under William Brymmer at the Art Association of Montreal. In Paris he continued his studies under Benjamin Constant and Jean Paul Laurens. In 1905 Hutchison moved to New York City to take a teaching job at the City College of New York as a tutor, later becoming an instructor. While studying at the Art Students League under William Merritt Chase Hutchison’s work began taking a more impressionistic style, his subject matter focused on landscapes.

By 1920 Hutchison had become the art supervisor of the Townsend Harris Hall School and remained in that position until his retirement. In 1928 Hutchison toured Europe and with Clarence Gagnon ( who was living in Paris at the time ). Hutchison would teach during the school year, and in the summer return to the family home in Hudson Heights, Quebec and then on to Baie St. Paul Quebec and the surrounding area to paint the landscape. His impressionist paintings of the Charlevoix prompted Robert Pilot to write ” The name F.W. Hutchison evokes a picture of the colourful landscape of the Lower St. Lawrence, for this district was for many years the theme of most of his pictures. Morrice, Cullen, Gagnon and Jackson, who so beautifully interpreted the French Canadian countryside. He worked, as they did, amongst the smiling villages or beyond into the austere hinterland.”

In 1940 Hutchison exhibited with the Art Association of Montreal and in 1949 60 of his paintings were exhibited at the Watson Art Gallery of Montreal.

Frederick W. Hutchison died in Hudson Heights Quebec at the age of 82.