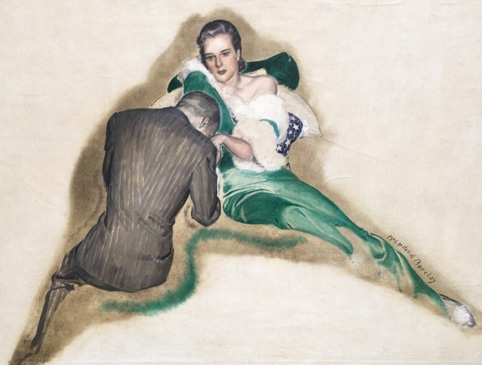 McClelland Barclay was born in 1891 in St. Louis, Missouri. Barclay moved to New York City in 1912 to study at the Art Students League under Tom Fogarty and George Bridgeman. Later he would continue his art studies at the St. Louis Museum of Fine Arts, the Corcoran School of Art in Washington D.C. and the Art Institute of Chicago. Barclay was a multi-talented artist, working both as a sculptor and jewelry designer, but it was as an illustrator that Barclay is best remembered as the most important figure in early twentieth-century illustration.

His talents as an illustrator saw him create posters for the Red Cross, military and service organizations and advertising illustrations for major corporations. In the 1920s and ’30s, Barclay produced cover illustrations for most American magazines, including Colliers, Pictorial Review, Country Life, Ladies Home Journal, Saturday Evening Post, Redbook, Country Gentleman and Cosmopolitan. Companies such as A&P, Elgin Watches and Lever Bros. hired Barclay for illustrations. The most memorable advertising campaign Barclay will be remembered for was his illustrations for General Motors Fisher Body Works and the glamorous and beautiful women Barclay portrayed in his artwork ( his second wife modelled for most of the illustrations in the 1930s). During this time period, Barclay also created movie posters for Paramount Pictures and Twentieth-Century Fox., and was one of two artists who first painted the film star, Betty Grable.

In the late 1930’s Barclay established the McClelland Barclay Art Products Corporation to create animal figures, ashtrays, bookends and boxes for home and office. All were cast in metal with a bronze patina, and priced to make his creations affordable for the consumer market.

In 1941, with the US declaring war, Barclay enlisted in the navy ( having already served in World War I ) as a procurement and recruiting officer, and later working at the War Arts Corp. producing recruitment posters and designing camouflage designs for the armed forces. On July 23, 1943, Barclay was killed when the ship he was working on as a combat artist was torpedoed in the Solomon Sea. In 1944 Barclay was posthumously awarded the Purple Heart. In 1946 the McClelland Barclay Fund for Art was established to aid American artists and in 1995 the Society of Illustrators inducted Barclay into their Hall of fame.