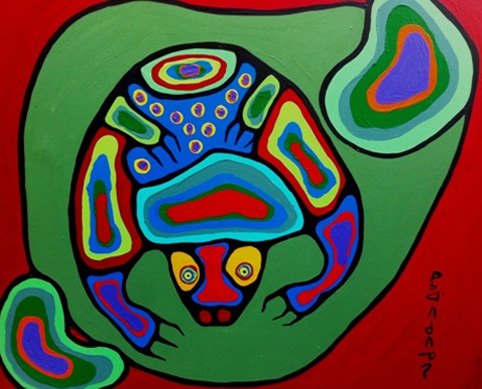 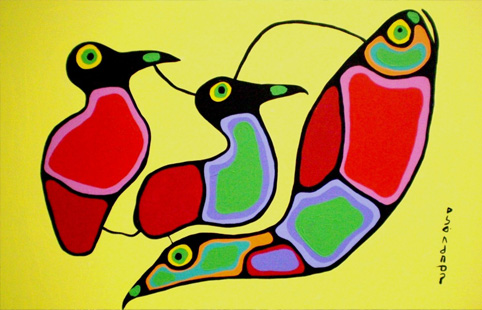 Norval Morrisseau is considered one of the most important and original artists Canada has produced. The founder of the Woodland School of Art, he has been referred to as a prominent member of the group of 7 first nations artists and the Picasso of the north.

Morrisseau was a self -taught painter, printmaker and illustrator. Morrisseau applied his spirituality and mysticism to the iconography of traditional first nations myths and legends (and later incorporated Christian themes) to create a new style of art in Canada.

Born in the Bingwi Neyaashi Anishinaabek culture, Morrisseau was raised by his maternal grandmother (a Catholic) and grandfather, a shaman that passed the oral history and stories to his grandson, that later became the narrative for his art. Painting in brilliant neon-like colours ( which Morrisseau believed could heal ) within the borders of black outlines Morrisseau painted the spirits, animals and legends of the Ojibwa, as well as painting the visions in what Morrisseau described as dream states.

Holland Cotter, reviewer for the New York Times described his art as “visionary, sometimes violent, as much about fearfulness as about transcendence.”

A show in 1962 at the Pollock Gallery in Toronto (the first indigenous artist to be exhibited in a contemporary gallery in Canada) marked a turning point in his career, bringing fame and exhibitions nationally and internationally.